Youth With a Mission, France 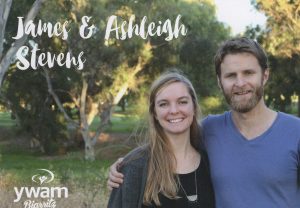 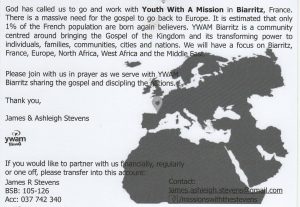 Their priority is to help grow leaders and follow Christ’s agenda in this region. OM works in 20 countries across East Asia and in Adelaide. Mike and Ann have a mission to support the growth of OM ministries in order to see vibrant communities of Jesus followers among the least reached.

Mike and Ann also serve with a church planting team working in the northern suburbs of Adelaide where there is little gospel presence.

They have a passion for a daily fresh work of the Holy Spirit and for faith to be expressed authentically in the realities of living in Australia and in serving leaders in East Asia Pacfic.

The Andrews Farm Community Church’s Global Mission Team believes God has led us to the Mekong Delta region as our global focus, with special attention on Cambodia and possibly Laos into the future.

In cooperation with the Baptist Churches of SA’s Global Interaction, we have partnered with Rob & Deb Griffith in Cambodia.

We are planning to develop our support with them into the future.